The Church is situated near the 'West Gate' of the old town wall adjacent to the Castle.

It was one of a number of places of worship that came into being following the Welsh revival in 1735 when the Spirit of God came upon men like Howell Harris and Daniel Rowlands and their powerful preaching turned the people back to God.

There is good reason to believe that the Church was formed in about 1810, or earlier, and met in a room behind a house in the Main Street, called the York Tavern.

Bethel [that was the name of the original wooden structure] was errected 16 years after in 1826, and very little is known of the church until 1833.

The present "West Gate" Chapel was built in 1866-7, the foundation stone being laid July 11th 1866 and the dedicatory prayer offered by a Rev'd Evans.

The chapel was opened on June 18-19 1867.  West Gate chapel was part of the Calvinistic Methodist Denomination until June 2006.

Westgate has a long history of evangelical ministry:

in 1973, Peter Thorneycroft a young evangelical man from Theological College, began his ministry at Westgate and is now retired, after ministering in Australia and Tazmania.

in 1987, Phillip Steed, another young evangelical man from Theological College, began his ministry at Westgate and is now Regional Director for OMF in Scotland.

in 2003, Edward Evans, another young evangelical man from The London Theological Seminary, began his ministry at Westgate.

With Edward as Pastor, the congregation at Westgate purchased the building in 2006 and we became an Independent Evangelical Church.

in 2009, Rev Robert James , an older long established evangelical minister, commenced his ministery at Westgate. Rob's ministry at Westgate finished at the end of March 2015.

in 2017 Peter Roberts completed his Theological training in W.E.S.T. Bridgend (now U.N.I.O.N) and became Pastor of his first church at Westgate in June 2017. Peter stepped down from ministry in September 2017.

in 2018 Edward Evans, was inducted again as Pastor of Westgate. We are so blessed that God is continuing the work He started when He brought Edward to minister at Westgate in 2003. All of Edwards Sermons and Bible Studies can be heard in the section SERMONS & MESSAGES. 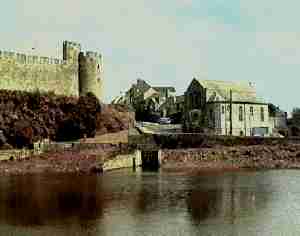